In Defense of the "Armchair Sleuth", we wouldn't need them if the ISP had a better image! 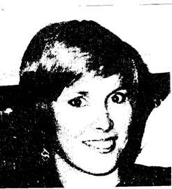 Exhibit A: Unsolved murder of "Pixie" Grismore shows why we need "armchair sleuths"
It was reported in yesterday's Indianapolis Star that the Indiana State Police wanted people on Facebook to stop posting pictures of men that the users think bear a resemblance to the composite drawing of the suspect in the February murders of Liberty German and Abigail Williams. The two were murdered in February east of Delphi. The article is entitled: "ISP to Facebook users: Stop "armchair sleuthing" on Delphi murders".
Vic Ryckaert reports:
Indiana State Police are urging users of the social media platform to stop posting pictures of men alongside the composite sketch of the Delphi murder suspect.
"Those are of no value and take up investigative time," said Capt. Dave Bursten, ISP's chief public information officer.
Investigators have received more than 500 new tips since they released the composite sketch of the man they believe killed 14-year-old Liberty German and 13-year-old Abigail Williams.
The girls disappeared  Feb. 13 while hiking near Monon High Bridge in a wooded, remote area east of Delphi. Their bodies were found the next day about a half-mile from the bridge.
Bursten on Wednesday cited a growing problem of "armchair sleuthing" by people who have combed websites to find mugshots of random men who resemble the sketch. Some people post their dubious detective work on Facebook, he said.
"A person that does that may open themselves up to some civil liability," Bursten said. "They will have to suffer the consequences of their own stupidity."
"They are placing themselves in legal jeopardy, and they are doing absolutely nothing to help the investigation," he said.
Tips, legitimate tips that is, on the murders should go to the hotline, (844) 459-5786, or abbyandlibbytip@cacoshrf.com, Bursten said.
First IR would like to express our most sincere sympathies to the friends and families of the two women killed in the Delphi murders. And if anyone out there has information about this case please call the police.
Contrary to the statements made by Captain Dave Bursten. The reason we need "armchair sleuths" is exactly because of the distrust many people  have regarding the ISP. Longtime readers of Gary Welsh's Advance Indiana blog might recognize Captain Bursten's name. Gary first made mention of Bursten back in May 2011 in his post about the unsolved 1978 murder of Mary Beth "Pixie" Grismore of Marshal, Indiana whose death is rumored by some to have been a political cover up. Grismore who was found murdered in Ohio in 1978 was rumored to have had an affair with former Senator Birch Bayh. Welsh had pointed out how although the Ohio Attorney Generals website has Grismore's case mentioned on their cold case website here. That the ISP didn't not list the case on their website.
Welsh did here from Captain then Sergeant Bursten of the ISP. Welsh wrote in 2011:
UPDATE: Sgt. Dave Bursten, public information officer for the Indiana State Police, has confirmed the Grismore case is still an open investigation. He said the closing of the Terre Haute post and revamping of the agency's website is why her case is not listed as a cold case file. Bursten said anyone with information or tips regarding the case should telephone the agency's hotline at 1-800-453-4756.
Two months later in July 2011. Gary Welsh posting about the still unsolved disappearance of Indiana University student Lauren Spierers. Welsh mentioned that the ISP still had not put Pixie Grismores case on their cold case website.
Welsh had this to say in his July 2011 post:
The Indiana State Police don't even have her case listed on their website as a cold case file, a fact a police spokesman told me was simply due to an oversight during a revamping of the department's website. Nearly two months after I raised the question, the omission has still not been corrected. Her case is listed on the state of Ohio's cold case list, even though all investigatory leads led them right back to Indiana. No, the Indiana State Police have no intention of trying to discover who actually murdered Mary Beth Grismore. Let's hope Indiana police are truly interested in solving the disappearance case of Lauren Spierers.
Unfortunately as of this writing no trace of Lauren Spierers has ever been found.
Welsh last all of us can tell mentioned Bursten in a 2014 post regarding an investigation the ISP was conducting at the request of the Marion County Prosecutors Office.
Here is the master's last known mention of Bursten:
Hey, Capt. Bursten, I'm still waiting for ISP to include Pixie Grismore's unsolved murder on your cold case list that you told me a couple of years ago was going to occur in short order. Isn't her case just one in a long string of cases your agency has deep-sixed for corrupt political motives?
Indy Republican's staff recently checked the ISP's cold case website and even after six years the Grismore case is still not on their cold case list. This hardly inspires confidence in Captain Bursten that after six years they still have apparently done nothing to solve Pixie Grismore's murder or the disappearance of Lauren Spierers. Also the forcing out of the ISP's former corruption commander Sgt. Ryan Harmon after Harmon kept pushing on a sex scandal at Martinsville High School click here for more information on Harmon's case. There is also the questionable conduct of Indiana State Police Detective Paul Hansard regarding the railroading of former Indiana Secretary of State Charlie White. Click here for information on Paul Hansard.
Our position is unless or until the ISP shows a willingness to take steps to salvage its reputation among Hoosiers. Then we say  to Captain Bursten that if he the ISP keeps giving the impression that they are not able or willing to investigate crimes committed in Indiana. That he should get used to their being a lot more "armchair sleuths", not less.
So to all the fellow "armchair sleuths" out there we salute you!
True Republican at 7:00 PM
Share