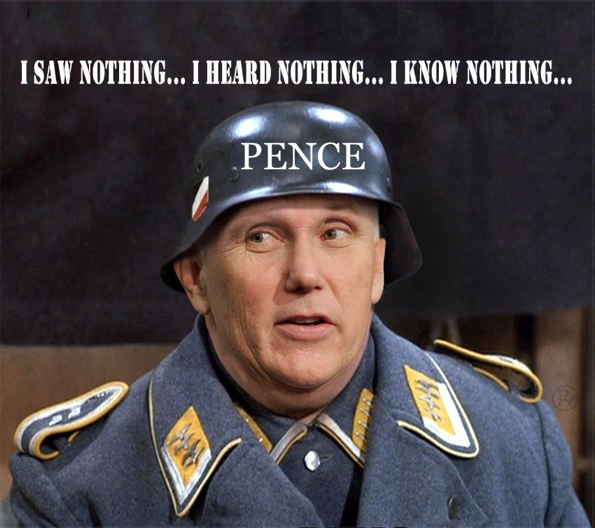 Mike Pence praying that people are buying this bullsh@! he is peddling
Good evening everyone in cyberspace! Well we here at IR had thought we could give Mike Pence at least till Halloween to prove himself as Vice President. Old Mikey though continues to exceed the already low opinions we have of him. Only six months into what we hope will be his only term as Vice President. We honestly can say we have seen enough. Our advice to the Vice President is: "Resign now while you still can!" After countless denials of what is going on in the administration that he is part of. He is either a fool, a damned liar, or both.
In an article published on IndyStar.com today called "Vice President Mike Pence unaware of Donald Trump Jr's Russia meeting" Tony Cook reports:
"The Vice President is working every day to advance the President's agenda, which is what the American people sent us here to do," Pence spokesman Marc Lotter said in a written statement. "The Vice President was not aware of the meeting. He is not focused on stories about the campaign, particularly stories about the time before he joined the ticket."

Trump's oldest son released emails Tuesday showing he knew the damaging information he was seeking about Hillary Clinton was being peddled by the highest levels of the Russian government.

Told that the Russians had "incriminating information" about his father's Democratic campaign rival, Donald Trump Jr. responded: "If it's what you say, I love it."

The emails appear to back up the most damning revelation in New York Times reports that Trump's closest associates and family members actively sought information they knew was part of a high-level Russian government effort to support Trump's campaign.

Pence has repeatedly denied any contacts between Trump associates and Russia since taking office as vice president.

During a round of Sunday morning news show appearances in mid-January, Pence told John Dickerson of CBS' Face the Nation that there had been no contacts.

"I think to suggest that is to give credence to some of these bizarre rumors that have swirled around the candidacy," Pence said at the time.

That same day, Chris Wallace of Fox News Sunday, asked Pence if he had asked whether there had been any contacts between Trump associates and the Russian government or its intermediaries.

"Of course not," he said. "Why would there be any contacts between the campaign?"

A month later, Trump's national security adviser Michael Flynn was fired for lying to Pence about contacts with a Russian official.

Pence has also said he did not know Flynn had secretly lobbied for the Turkish government, despite reports claiming Flynn had actually disclosed to the Trump transition team back in January that he was under a federal investigation.

Pence was leading the transition team at the time.

Once again Tony Cook writes another article that is so good we can't figure out why he is still employed by The Indianapolis Star also known as the CIA's paper of record. He points out very well about how it is strange that Pence claims he didn't know that former National Security Advisor Michael Flynn had lobbied for Turkey. Even though it appears that Flynn disclosed this to Trumps transition team which Mike Pence was in charge of!

Also as we have chronicled on this blog several times. Pence spokesman Marc Lotter is not to be believed on anything. He is a former lackey of "Godfather" Governor Mitch Daniels and former Indianapolis Mayor "Boss Greg" Ballard!

Also his actions as Governor ranging from his stiffing the Hoosier state with the bill for Bicentennial projects, to picking Eric Holcomb as his successor, and appointing that dumb as a door post Rick Hite to run the Indiana Civil Rights Commission. These actions as Governor and his unbelievable denials and asskissing he has committed as Vice President show clearly he needs to leave political life entirely.

C'mon Mikey! You are obviously stressed out, and tired after rolling out of bed at noon everyday. Public life doesn't suit you. Find something else worthwhile and salvage something of your dignity. Just resign and leave Washington.

Here are what some others think of Vice President Pence:

Lane Terrell @WorldTrvlrDaddy·6h
Replying to @JWGOP and @BillKristol
Exactly! @JWGOP This whole episode will amount to a very short resurrection of his career.

Middle Is @MAmichigander·6h
And when it's all done, we in Indiana respectfully request that he and his mother stay the hell away from us.