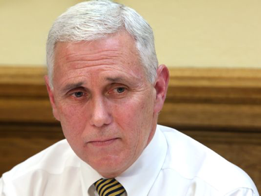 Well IR was hoping we could get through this weekend without having to witness anymore stupidity out of Vice President Pence. But as is his won’t good old Mikey just had to show us all just how much of a political hack he is. INDY REPUBLICAN has many times over the past year and a half of this blogs existence chronicled the train wreck that is Mike Pence. Everything from his whoring himself out at a fundraiser for his master President Trump, photographic proof that he is losing his soul, his attempts to act like “I know nothing” Sergeant Schultz,
to his dishonesty about his residency when he ran for governor. We have covered it all. At today's Colts game facing off against the 49ers, Vice President Pence decided to up and leave the game.

Frank Schwab of Yahoo Sports has the story:


Vice President Mike Pence left the Indianapolis Colts game before it started on Sunday, making a show out of leaving when players from the visiting team knelt for the national anthem. President Donald Trump later tweeted that he had asked Pence to leave the game if anyone knelt.

I asked @VP Pence to leave stadium if any players kneeled, disrespecting our country. I am proud of him and @SecondLady Karen.
— Donald J. Trump (@realDonaldTrump) October 8, 2017

Vice President Pence being the sniveling toady he is submitted to his master Donald Trump by running away like a whiny little girl leaving the game. Not content enough to simply leave. The VP decided to take to Twitter and express his outrage at the San Francisco 49er's kneeling during the national anthem. Probably because Pence was afraid that President Trump would question his manhood if he did not.


I stand with @POTUS Trump, I stand with our soldiers, and I will always stand for our Flag and our National Anthem. pic.twitter.com/B0zP5M41MQ
— Vice President Pence (@VP) October 8, 2017


Which is interesting as earlier Pence had tweeted that he wanted to cheer on the Colts and honor former Indianapolis Colt Peyton Manning:


Or here in this shot of Mike and Karen standing for the national anthem:

We were proud to stand - with all our @Colts - for our soldiers, our flag, and our National Anthem 🇺🇸 pic.twitter.com/mkZiKMkPDD
— Vice President Pence (@VP) October 8, 2017

Last week IR friend and fellow blogger Paul Ogden of Ogden on Politics fame summed up INDY REPUBLICANS feelings perfectly both regarding the "protesters" kneeling during the national anthem and the bone headed reaction of our Commander-in-Chief to these classless fools:

I (Paul Ogden) find the players actions at best misguided and at worst deplorable. The protest is supposed to be about raising the issue of racism.  But the protest does not do that at all.  Instead the protesting players are slapping the face of all those who have fought and died so that we can have the freedoms we Americans enjoy, including the freedom those players have to earn millions of dollars playing a game one day a week.  Those players might have as well gone up and spit on the flag and what it represents.   But it is exactly because of what that flag stands for that we should respect and allow the protests to continue.  The flag stands for the freedom to express one's views, especially those that are political, i.e are about a matter of public concern. Now I am well aware that the Free Speech Clause does not apply to private businesses, such as the NFL.  And, yes, the team owners can almost certainly legally fire the players for their objectionable speech.  But just because the action would be legal, does not mean it is right.  Free speech is not just part of a constitutional amendment.  It is an essential characteristic of American society and a bedrock principle of our political system.  If people are constantly threatened with their jobs if they dare express their views publicly then robust political debate is silenced and we all suffer as a result. Sadly, we have a President who has long declared open hostility to the American tradition of free speech.   Candidate Trump attacked American free speech during the campaign., even suggesting that the requirement of "actual malice" for libel actions be done away with.  Trump warmly praised dictators who violently put down public protests and kill journalists who write negative stories about those dictators. He is the first President since John Adams who has argued that Americans actually have too much free speech.   Even before entering the world of politics, Trump was well-known for suing (or threatening to sue) anyone who had the temerity to speak ill of him publicly. Unfortunately, too many of my Republican friends have tossed aside their conservative principles to back the President's over-the-top assertion that these NFL players should be fired by their employers. In doing so, they are eschewing Constitutional principles and embracing the liberal tactics of suppressing unpopular free speech, i.e. speech liberals do not like  If those tactics are wrong for liberals, they are also wrong when done by conservatives.   The answer to unpopular speech is not to silence that speech, but to counter it with other speech.  By all means let's roundly condemn those players who insult the grand principles for which our great country stands. But, as one of those principles is the right to speak out on matters of public concern, let's stop short of demanding that speech be silenced by firing the speakers.   For conservatives to do otherwise makes them no better than the liberals.

INDY REPUBLICAN just like Paul Ogden feels that these "protesters" are showing extreme disrespect to the national anthem of this the greatest country in the history of man. Nevertheless standing up for these United States and the Anthem demands that we should allow the protest to continue. We conservatives, libertarians, and republicans should counter the protesters with speech of our own defending the U.S. of A. We must not attempt to trample the free speech rights of anyone. Nor should we turn tail and yell "UNCLE" like the spineless jellyfish of a Vice President Mike Pence did earlier today.

IR would like to ask Mike Pence this question: "Why not stay during the game and show that you were not intimidated by the cowardly kneeling during the anthem?" Instead by leaving you gave the (accurate) impression that you are terrified of any sign of dissent weather real or imagined.

Bill Kristol former chief of staff to Vice President Quayle and Editor-in-Chief of The Weekly Standard magazine, has some interesting observations about the Vice President's conduct at today's Colts game:


Pence is so 100% patriotic he left the game, but he's fine doing a fundraiser Monday for (among others) Putin-apologist Dana Rohrabacher?
— Bill Kristol (@BillKristol) October 8, 2017

Mr. Kristol is referring to California Republican  Congressman Dana Rohrabacher. The Vice President is scheduled to be at a fundraiser for Rohrabacher tomorrow. This despite the fact that many political observers have expressed concerns about Rohrabacher's overly friendly views towards Russian tyrant and former KGB Agent Vladimir Putin. If being around a bunch of pampered, self-indulgent, whiners who show disrespect to the national anthem is too much for the Vice President. Then how can he justify fundraising for a congressman whose own patriotism has been rightfully questioned?

Kristol also had this to offer bit of advice for Mike Pence to consider:


If you're leaving any event featuring individuals who've disrespected our soldiers, you should walk out of the Oval Office when next there. https://t.co/gY1ALBCPJP
— Bill Kristol (@BillKristol) October 8, 2017

It's a fair point Mr. Vice President. If the VP or any supporters of his feel an need to respond. We will happily post there responses. We are not going to hold our breath.

Have a Happy Columbus Day tomorrow everyone!

UPDATE: WRTV reporter Katie Cox reports that the photo of Mike and Karen Pence in Colts attire was actually a photo taken back in 2014. It is apparent when you compare the photograph of the Second Couple standing for the anthem in which the Vice President is wearing a business suit and Mrs. Pence is wearing a Colts Jersey No# 18. And in the other picture both Pences are wearing Colts apparel and Mrs. Pence is wearing a Colts No# 50 Jersey. Click here for the full story.
UPDATE: Patterico over at Redstate.com has written here about how Mike Pence’s whole childish walkout at today’s Colts game was a pre planned stunt.
True Republican at 6:00 PM
Share