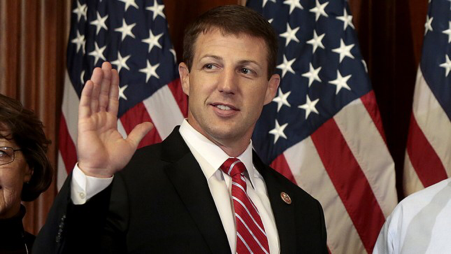 According to a July 5, 2017 article by Cristina Marcos published on thehill.com Congressman Markwayne Mullin of Oklahoma has decided to violate his original pledge to serve only six years in congress and run for another term.

Marcos writing for The Hill reports:

In a video posted by his campaign, Mullin said he and his family originally only expected a six-year run when he first launched a bid for the House in 2012.
But after feeling frustrated during his first two terms trying to work with the Obama administration, Mullin said he wanted to stick around while President Trump is in office.
"We looked at each other and we said, 'We're running again,' " Mullin said of a conversation with his wife, Christie.
"We understand that people are going to be upset. And we get that. We understand it," Mullin said. "I'm not hiding from that. Because we did say we were going to serve six years."
Mullin appeared jointly in the video with his wife, who said they initially worried that a tenure in Congress would negatively impact their family and plumbing business.

"We truly felt like we would serve six years and have to come back and patch together our family, like pick our business up," Christie Mullin said.
But their worst fears never came to fruition, she said.
"Our kids said, 'Dad, yes, you have to run again!' " she said.
Markwayne Mullin attributed his decision to having a better understanding of how politics works and said his position has simply evolved over time.
"I don't think there's one person that's never changed their mind six years apart from each other or how they would approach things," Mullin said.
This is not the first time that Congressman Mullin has drawn criticism during his time in office. Back in April Mr. Mullin was under fire for saying that it is "bull crap" the idea that taxpayers pay his salary.
On April 13. 2017 Nikita Vladimirov wrote:
Rep. Markwayne Mullin (R-Okla.) faced off with constituents at a town hall this week, telling the members of the audience that they don't pay his salary.
"You say you pay for me to do this? That’s bullcrap," Mullin said at the town hall in Jay, Okla., according to a video of the incident."I pay for myself. I paid enough taxes before I got here and continue to through my company to pay my own salary. This is a service. No one here pays me to go,” he added.
After constituents pushed back, Mullin reiterated that being a lawmaker is not "how I make my living."
“I’m just saying ... this is a service for me, not a career, and I thank God this is not how I make my living,” he said.
The article states that Mullin owns Mullin Plumbing. Which is presumably how Mullin makes most of his money since he claims not to be a "career politician".
IR knew nothing of Mullin until this past week. But just judging by the tone that Mullin takes and the overall dishonesty that permeates from this man's mouth. He should be voted out of office!
Fortunately Republicans already have a good candidate challenging Mr. Mullin in next years GOP congressional primary. His name is Jarrin Jackson. He ran against Mullin in the 2016 primary. He is an Afghan War veteran, an executive of a nonprofit organization, and a fierce advocate of term limits. He also opposes nation building. If anyone is interested in helping Mr. Jackson in his bid to oust Mullin from Congress you can click here to go to his website and help out his campaign.
Hill's Columns on Mullin:
http://thehill.com/homenews/house/340698-gop-lawmaker-reverses-term-limit-pledge?amp
http://thehill.com/blogs/blog-briefing-room/news/328615-gop-rep-bullcrap-to-say-taxpayers-pay-my-salary-i-pay-for