Wanna Chat with Governor Eric Holcomb? Just Bring $10,000 and you can talk to them! 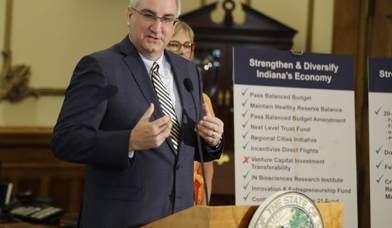 Today's "Behind Closed Doors" column in the Indianapolis Star by Tony Cook shows why he is a far better reporter than the Star deserves.

Readers of this blog know just how little we all here think of Eric "Bagman" Holcomb. Tony Cook's piece today helps illustrate why we think Holcomb is a vile sleaze ball that is not fit to run a one car parade. Let alone run a state!

Tony Cook writes in today's piece entitled:
"Got $10,000? You can dine with Gov. Eric Holcomb:

Gov. Eric Holcomb is holding a fundraiser later this month at the swanky Lucas Estate, with tickets priced as high as $10,000.

Those top-tier donors and their spouses will be treated to round table dinner with the governor in a setting the Lucas Estate website describes as "reminiscent of a French Country Manor for a member of aristocracy."

Don't worry if you don't have $10,000 to throw around you have other options Cook says:

For a more modest $2,500 contribution, donors can attend a VIP reception after the dinner.

But never fear if you don't have quite $2,500 to curry favor with contribute to Holcomb's fundraising shindig you can still be in on the fun:

Those who contribute $50 to $2,500 will have access to a general reception party with music from local cover band Dave and Rae.

So what exactly is his holiness Eric Holcomb having a fundraiser for? Tony Cook says:

An invitation to the June 27 event, dubbed the "Team Holcomb Launch Party," promises "new and exciting announcements from the governor" as well as "dancing, food, drinks and lots of fun!"
Contributions will be split 70-30 between Holcomb's campaign and the Indiana State Republican Party, according to the invitation.
Holcomb still has plenty of time to fill his campaign coffers. The governor is only six months into his four-year term.

Okay let's just hold on for a second while we pass around the barf bag! Let's try and wrap our heads around this here. So "Bagman" Holcomb is asking Republican voters to shell out $50 to $10,000 or more so that we can hear new and exciting announcements from his worthless butt! And as a bonus we all get treated to dancing, food and drinks as well!
Let's think. Pay up to $10,000 to hear worthless drivel from "Bagman" Holcomb and eat shitty food and watered down drinks from Holcomb himself! We would rather spend a weekend recovering from eating White Castle!
As Cook's article points out he is only six months into his four year term as Governor. Is he really that scared about his reelection prospects now? If so why? Maybe the Indiana Republican Party is worried that Holcomb might be a drag on them later so they are trying to get money out of him now.
Having this kind of stupid fundraiser so early in his term just shows Holcomb likes other people's money!
Welcome to Indiana people! The worst government money can buy!